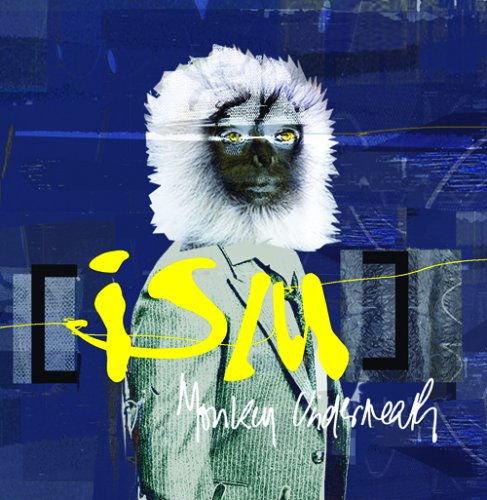 From the bottom up, Monkey Underneath finds dreams and discovery. The Haunting, melodic and epic lyrics weave elements of rock, electronica, trip-hop and industrial. Features the first single 'Breathe'. STM. 2006.

Like a kindler, gentler Nine Inch Nails, New York's ism--lower case letters, please--have constructed a debut that's equal parts alternative and industrial. It's also big, bold, and dramatic. Singer/guitarist Andre Mistier, a Yale grad with a degree in comparative mythology, describes the group's inaugural effort as an exploration of "the animal and organic versus the technological and inorganic." (He's joined by Gerard Toriello on guitar, Leigh Battle on bass, and Mike Higgins on drums.) Never fear, the oft-maligned "concept album" tag doesn't apply, but the idea snakes its way through these 10 selections, especially the title track ("We've gone past fire, but not progressed/weve made more, but feel less"). Aside from NIN, ism have also been compared to Radiohead, but it's a description that doesn't quite fit. The American quartet exhibits an anthemic quality--a little like Audioslave--which the more elliptical British band doesn't share. Highlights include the soaring single "Breathe" and Pink Floyd-esque "Crazy Dream," which ends Monkey Underneath on a meditative note. --Kathleen C. Fennessy

I havent enjoyed a song this much on the very first listen in a long time. -- WHRL/Albany, NY APD/MD Capone - December 2005

Remarkably accomplished for their age, they are the kind of band that makes every song sound like a single. -- from CityBeat  Sept. 2005

ism is one band that has found a way to encompass a sound that should transcend most musical barriers. -- from Catsask Music amp; Entertainment  June 2005

"Monkey Underneath is less a concept album than a thematic collection," says Mistier. "We wanted to explore the relationship between the two sides of modern manthe animal and organic versus the technological and inorganicbut do so in a way that is first and foremost a powerful and enjoyable listening experience. You can think if you want to, but its most important that you feel. "Our sound includes organic instruments that are generally associated with the rock genre, like voices, guitars and drums, as well as the trippy, cool vibe of electronic sounds," he adds. "So we can communicate all the elements of modern man, but in a way thats fun and very listenable. The ideas are there to make the listener think, but I try write them in a way thats not overly intellectual so they come across more as common sense, universal nuggets."

In his legendary, generation defining anthem "Give Peace A Chance," John Lennon sang of the many "isms" that so narrowly define humanitys general way of thinking. But why limit ourselves to one "ism" when life is so abstract and the worlds in such crying need of more universal understanding? Maybe the problem is not just the direction in which we narrow our ways of thinking, but that fact that we choose to narrow our thinking at all.

Thats just one of the powerful philosophical questions explored by the New York based band ism on their stunning STM Records debut Monkey Underneath, a collection that, perhaps more than any other album of the modern rock generation, artfully blends intellectual yet relatable lyrical concepts with a brilliant weaving of melodic rock, electronica, trip-hop and industrial elements. Its new single "Beside The Sun," which blends a sensuous, rolling electronica vibe with a fiery Nine Inch Nails flavored edge, is primarily about a lover, but beyond that, people who take their passion and ride it to the utmost; its a call for isms fans to do the same.

For a band that formed only a few years ago and which began performing as a unit regularly a year and a half ago, the buzz has been incredibleand well deserved. Last June, ism (whose East Coast based members include lead singer/songwriter Andre Mistier, guitarist/vocalist Gerard Toriello, bassist/guitarist Leigh Battle and drummer Michael Higgins) performed for 5000 screaming fans at Kotzia Square at the European Music Day Festival in Athens, Greece. The Greek publication Soundpark exclaimed, "Their [isms] performancedivulged the nerve and passion of good rock and roll, combined with the sound of novelty, which has been breaking up a storm with bands such as The Strokes and The Killers." Hundreds of fans at isms many sold out performances around the U.S. have favorably compared them to two bands the foursome counts as influences, Nine Inch Nails and "a more rockin Radiohead." Their tour schedule since last year has been a relentless joyride, hitting cities on the West Coast, throughout the Midwest and the Eastern Seaboard; this summers busy slate takes them from L.A. to Seattle, Spokane, Billings, Chicago, Minneapolis/St. Paul, Indianapolis, Arkansas, Oklahoma, South Dakota, Kansas and New York. At Nebraskas Comstock Rock Festival (July 16), ism shares the bill with, among others, Poison, Styx and Puddle of Mudd.

Get the best of PFF with our Pro and College Subscriptions

Breaking down the DFS strategies and approaches to playing the DraftKings Showdown slate for the Dallas Cowboys versus Minnesota Vikings Week 8 Sunday Night Football matchup.

by Ben Brown and Andrew Fenichel • 20 hours ago

The biggest fantasy football takeaways from Week 8 of the 2021 NFL season, including Justin Fields' breakout game against the San Francisco 49ers.

by Anthony Treash • 18 hours ago
NFL

PFF’s Game Recap series features immediate takeaways from PFF's top analysts to offer a detailed breakdown of the game’s most notable performances before the grades and advanced stats are reviewed and finalized by Senior Analysts.

Breaking down the Week 8 fantasy football rankings and tiers for every position, including analysis, implied point totals, betting spreads and more.

Breaking down the Week 8 fantasy football rankings across all positions, including sit/start notes and NFL players to target on the waiver wire and in trades.

From Ohio State's uncharacteristically poor performance in the trenches to Caleb Williams' historically good start to his true freshman season, PFF sifts through some of the biggest storylines from Week 9 of the 2021 college football season.

Former NFL free safety Darius Butler offers his insight into the Week 8 slate and gives his favorite betting picks of the week.

Who do you cheer for? PFF grades every player in every game for every team. Dive deep into your fandom and follow your team on PFF for exclusive team stats and NFL team rankings.

PFF analyzes every player and every play of every game to deliver player grades, stats, and rankings for the NFL, fantasy football, and NFL Draft.